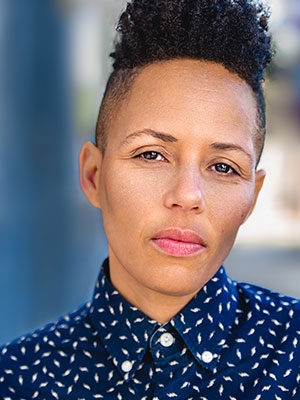 Robin Cloud is an award-winning writer and director working in television and film. A current member of the AFI Directing Workshop for Women, Cloud wrote and directed the short film 2 DOLLARS that will premiere in the Spring of 2020.

Her first narrative short, OUT AGAIN, was executive produced by Refinery29 as part of their Shatterbox anthology and premiered in March 2017, receiving over 2 million views. In addition, OUT AGAIN received rave reviews and has screened at film festivals throughout the world.

Her docuseries, PASSING: A FAMILY IN BLACK & WHITE, executive produced by Topic/First Look Media, premiered at the Tribeca Film Festival in 2019. Cloud is a 2017 Kickstarter Creative Fellow and a graduate of Lena Waithe’s Hillman Grad mentee program. Robin has been featured in The New York Times, The Washington Post, Diva Magazine, GO magazine’s “Top 100 Women We Love,” Noire Magazine and Time Out New York’s “Quote of the Week.” 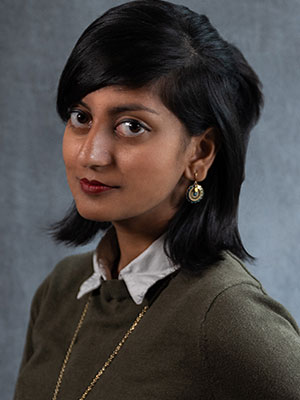 Listed as one of Variety’s 110 “Students to Watch” in their Educational Impact report of 2015, Revati Dhomse is a writer and director living in Los Angeles. Born in Mumbai and raised in California’s Silicon Valley, Dhomse sees herself as a child of two worlds. Her undergraduate capstone project THE DEATH OF COLM CANTER went on to receive praise by Cinewomen magazine in which they called it a “technically audacious and emotionally gripping film.” The feature version that Dhomse co-wrote explored similar themes of motherhood and duty and went on to earn the rank of quarterfinalist in the Academy Nicholl Fellowships in 2018. “The Death of Colm Canter” was awarded the Barry Josephson Screenwriting Fellowship at the Austin Film Festival in the same year. Dhomse and her writing partner’s pieces “The Truth” and “The Orpheus Lemon Amazing Mystery Journey” also gained the Austin Film Festival’s attention. Dhomse enjoys exploring themes of womanhood through magical realism and heightened genres in her art. Dhomse currently works as a coordinator for original series development at Nickelodeon. 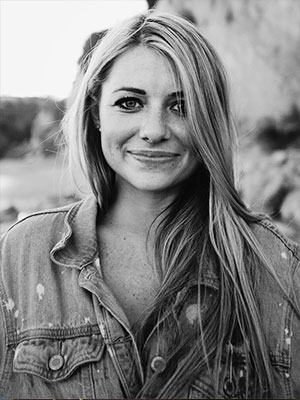 Born in California and raised in Nebraska, Ashley Eakin is a writer-director based out of Los Angeles with a physical disability. Her project produced in the AFI Directing Workshop for Women will have its world premiere at the SXSW 2020 Film Festival. Her project was also the recipient of the New York Women in Film: Loreen Arbus Disability Awareness grant.

Most recently, Eakin shadowed director Mark Pellington on the Quibi series SURVIVE, filmed in the Italian Alps starring Sophie Turner and Corey Hawkins. In 2017 she spent five months in Malaysia and Singapore working on Jon M. Chu’s film CRAZY RICH ASIANS. She also shadowed Chu during the production of the Freeform pilot GOOD TROUBLE, as well as assisted with the development of a TV series sold to Apple.

Eakin’s 2018 short documentary THE DETAILS, featuring Henry Golding and Awkwafina, was selected for the Hamilton Film Festival. Her narrative short film BLUE premiered at the 2019 LA Shorts Fest last summer and is currently on Amazon Prime.

In 2017 Eakin was featured in a SoulPancake video talking about her rare bone condition. The video went viral reaching over 50 million views. Her medical journey has immensely influenced her passion to pursue stories that advocate proper representation for people with disabilities. She is currently writing a coming-of-age feature film that disrupts the narrative of the disability community, inspired by her own life experiences.

Eakin is represented by Allen Fisher and Maggie Haskins at Artists First. 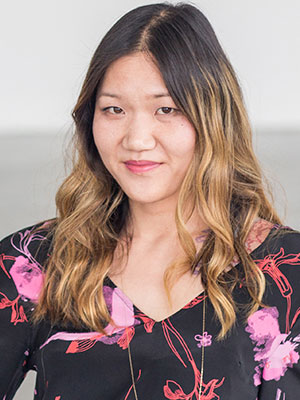 Tiffany Frances is a Taiwanese American writer and director working in commercials, music videos and narrative film. She loves to create character-driven dramatic storytelling with lyrical visuals and explore stories about women, marginalized voices and finding surreal moments within authentic situations. Originally from and currently living in Los Angeles after a decade of living in New York City, she attended UCSD for undergraduate studies in Media with a minor in Theatre and went to Art Center College of Design for her MFA in Directing.

Her background working as a photographer, producer, casting director and editor, on commercials and music videos has made her a well-rounded director. She was selected for SHOOT Magazine’s 2018 New Directors Showcase, where a trailer of her short film, WHAT I WISH YOU SAID, screened at the Directors Guild Theater in New York. Her short film MOVEMENT for National Geographic garnered over 1 million views on Facebook, while her films have screened at La Femme Festival, Nitehawk Shorts Festival, Brand Film Festival and Berlin Fashion Film Festival, and have been curated online by the Ladies with Lenses Vimeo Channel and Film Shortage. Her directing and photography work have been featured on Stereogum, Paper Magazine, Fast Company, Blackbook, The Fader, the Muse, Anthem Magazine and Ladygunn.

Her commercial clients include National Geographic, Citibank, Thrillist, Acura, Glossier, Dia & Co, Tanya Taylor, Montiel and Jonesy. She is a recipient of The Future of Film is Female fund in partnership with MoMA. She is currently developing a TV series based on her AFI Directing Workshop for Women film HELLO FROM TAIWAN, as well as a feature film titled MY SISTERS. 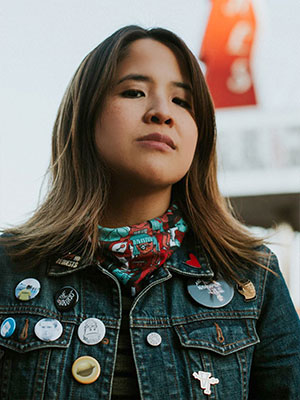 Musician-director Marie Jamora was recently named one of the Five Visionary Asian-American Female Filmmakers in Kore Magazine’s “New Hollywood” issue. Her short film FLIP THE RECORD screened in over 30 festivals worldwide, winning the Grand Jury Awards for Best Narrative Short at Urbanworld and the St. Louis International Film Festival. The film was also submitted for consideration for the 90th Academy Awards®. Her acclaimed first feature, WHAT ISN’T THERE, premiered at Slamdance Film Festival and is considered one of the top 10 Filipino films of the 2010s. As the writer of both films, her stories explore the rhythms of youth through music.

She is the executive producer and director of FAMILY STYLE, an Asian food and pop culture show with Justin Lin’s YOMYOMF and Warner Bros/Stage 13. Its first season can be binged on Facebook Watch and Youtube. They are now in production for their second season.

She began her career directing music videos during the golden age of the Philippine rock scene. After graduating from Columbia University with an MFA in Film, she returned to Manila to direct commercials and television.

Jamora became the first Filipina director to be accepted into the AFI Directing Workshop for Women, where she wrote and directed HARANA, a proof of concept for her next feature film. 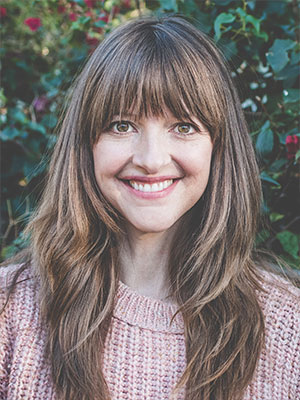 Bridget Moloney is an award-winning writer and director working in television, film and commercials. Moloney is the writer/director of the independent television pilot I WAS A TEENAGE PILLOW QUEEN that premiered at the 2018 Tribeca TV Festival. BLOCKS, her AFI Directing Workshop for Women film, premiered at the 2020 Sundance Film Festival. The film will also exhibit at SXSW 2020.

Moloney also directs commercials for large, nationally recognized brands. Her latest project was for Razor Scooters with Unicorns & Unicorns. As an actor, she’s appeared in more than 40 commercials, many network and cable television shows, and independent and studio films. As a playwright she won the Bennington Young Playwright competition. She also has a master’s degree in clinical psychology – that she only uses on set – and graduated with honors from Northwestern University. She lives in her hometown of Los Angeles with her husband and two young children.

She is represented by Cullen Conly at Mosaic and Susie Fox, Abby Glusker and Anna Flickinger at UTA. 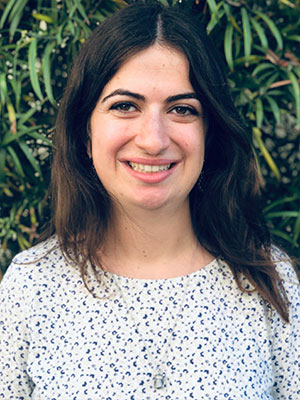 Lara Panah-Izadi is a French-American writer and director. She grew up in Paris and moved to the U.S. to study Mathematics & Philosophy and Theater Studies at Yale. In college, her first play, “In This World,” was selected for the Yale playwrights’ festival. She also directed two full-length opera productions and made an award-winning documentary based on Chekhov’s “The Seagull,” featuring Academy Award® winner Kevin Kline.

After college, Panah-Izadi worked on set for Barry Levinson and Quentin Tarantino. In 2017, she wrote and directed a narrative short film, CHLOE, inspired by THE TALENTED MR. RIPLEY but adapted to a female perspective. In 2018, she worked in creative development at Paramount Television to help discover book and story ideas to adapt into TV shows. Through the AFI Directing Workshop for Women, she wrote and directed SUMMER OF SNAKES, a short film inspired by Niki de Saint Phalle. She is currently developing two TV shows and a feature film. 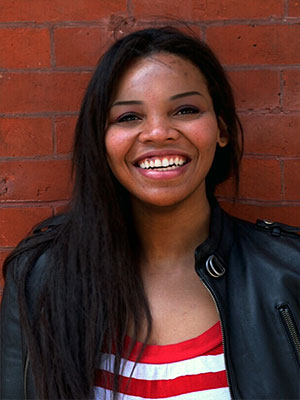 Nicole Taylor-Roberts got her professional start apprenticing with film and commercial directors at Smuggler and Tool of North America in the early 2000s. She participated in the Sony Picture Television Diverse Directing Program and the NALIP Diverse Women in Media Directing Workshop, and her pilot “Cabbie Mamis” was a semi-finalist in the MADE IN NY Writer’s Room.

She wrote and directed THE BATTLE OF LEXI SMITH, a short for an all-black woman anthology for BET Her. The story follows the emotional transformation of a cynical stand-up comic who masks her pain with humor when she learns that her breast cancer has returned to claim her one good boob. It’s a comedy — a black one. When she is not writing comedy about POC womenfolk, she is crafting serious dramas about them. Her feature screenplay “A Girl from Haiti” won the Grand Prize in the WeScreenplay Diverse Voices Competition, supported by ARRAY. Taylor-Roberts is a sought-after creative mind that has a knack for compelling storytelling.

Her AFI Directing Workshop for Women short film, 410 STAMPED, starring Eden Duncan Smith, was supported by a grant from the Will and Jada Smith Foundation. Taylor-Roberts is an alumna of Northwestern University Radio/Television/Film Program and Columbia University School of the Arts MFA Film Program.